This will be a short update without pictures I'm afraid, as this past week has not been very good hobby-wise due to both me and my son coming down with the flu. As a result I've not gotten very far on the unit of canadian militia, just priming them and drybrushing the bases. Although to be honest, the priming was done last weekend while waiting for the varnish to dry on the compagnie franches de la marines.

I've also drybrushed six of these nifty irregular movement trays from Warbases. Originally I planned to use them for Dux Britanniarum, but thought they looked good when Dalauppror used them for his Mohawks and I've also seen a couple of battle reports were they were used for Muskets and Tomahawks, so I thought I'd give them a go.

Now that I'm feeling better, it's back to the militia. Hopefully I'll be back with a new update during the weekend, this time with pictures.
Posted by Jonas M at 15:31 2 comments: 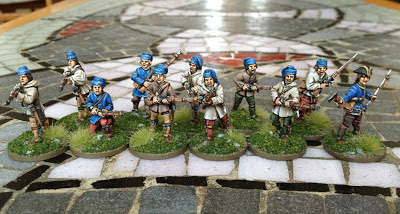 I've finally finished my first unit for the French and Indian War project, the Compagnie Franches de la Marine. As I spent some extra time on these, adding three highlights (or rather a re-applying of the basecoat and then two highlights) after the washes was applied, coupled with the many fiddly details, they sure took their time. I went for a new approach with the bases, giving them a little more attention than usual, to make them look more forest-like.

Both the miniatures and the bases came out quite nice I think, so in the end it was worth the extra time spent on them. I'm particulary pleased with the whites and off-whites on the shirts and capotes, even if there are always ways to improve my painting. I'll also keep experimenting with the bases as they still could use some extra details to make them look even better.

Anyway, here are some closeups. 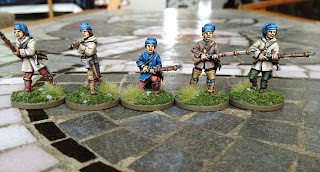 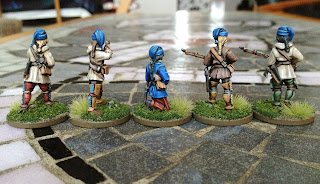 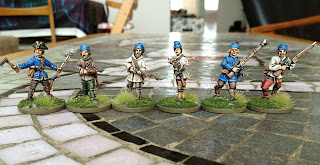 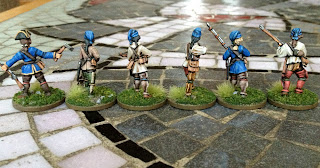 All miniatures are from North Star Minis.

Now it's on to the next unit – the miliciens.

And finally, a warm welcome to my new follower CLAM. Thanks for joining up!
Posted by Jonas M at 10:42 6 comments: 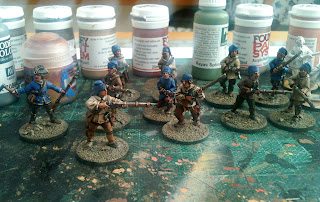 Finally, let me welcome my new followers: Baconfat, Ellie Great, Justin Penwith, Lee Hadley, MrJ, Schrumpfkopf, TamsinP and Tony. Thanks for joining up! I hope you'll like the blog and drop by for a comment or two from time to time.
Posted by Jonas M at 20:28 4 comments: 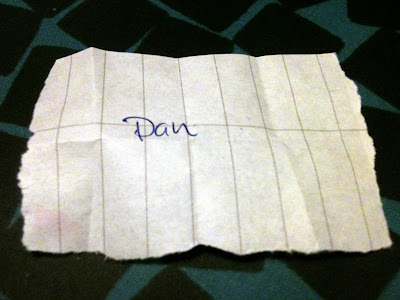 ... danmer! Congratulations! Please contact me directly with your address and I will send you the miniature: jonas[dot]mockelstrom[at]gmail[dot]com

This was fun! There were much more participants than I had hoped (12 in all). Maybe we'll do this again in the future – who knows?

Thank you all who participated and congratulations once again to danmer!
Posted by Jonas M at 17:58 6 comments:

Just a quick reminder that the deadline for participating in the prize draw is coming up tomorrow, January 7th. In other words: If you want a chance to win an anglo-saxon painted my me, there's still time!

Please take a look at the original post for all the details.
Posted by Jonas M at 18:31 1 comment:

Right then, I hope you've all recovered from celebrating the new year and are eager to get back to your brushes and gaming tables. With 2012 all in the books it's time to look forward and set some goals for 2013. I've already talked about two of them in my 2012 in retrospect post: keep updating the blog once a week and play 26 games during the year. Those should be fairly easy I think.

As for actual projects there are three I'm planning to do, in the following order:

As reported by Dalauppror we will both do a starter force for Muskets and Tomahawks. He has opted to do an all indian force – Mohawks, who conveniently was allied to the British – while I'm going to do the French. We will start with 200 points each, and if the game proves fun we'll probably expand our forces up to 400, and then maybe even 600 points. We're also keen to try out "La Longue Carabine", the FIW supplement for Sharpe Practice, but that will have to wait until we have enough miniatures painted (I'm guessing around 40-ish each should do).

The miniatures for my French arrived before Christmas, and I have started painting the first unit. This should be a fairly quick project, or at least the first part of it, as there's only 22 models in the starter force.

Yes, I've been lured into Dalauppror's exciting Baltic Crusades project! Actually, I had plans to do this myself before I got in contact with him, and started to read up on the period before the project was put on hold in favour of other things. But now when we got talking about it, it wasn't too hard to convince me to jump aboard this one.

I will be doing a force from the Swedish archenemy of the period – the republic of Novgorod – and I'm very much looking forward to this, not in the least because the models are really cool and it will be my first time doing a winter-themed army. Also, it will be great fun to try out Dan Merseys upcoming rules, Lion Rampant, as I really enjoyed his Dux Bellorum.

Back to the Dark Ages then. I'm going to do a force from the forthcoming Raiders supplement for Dux Britanniarum, but I'm not telling which just yet. All the miniatures are purchased, and the force will also contain some fun "bonus stuff" to add a bit of extra character. This project was originally planned for December, but as the Welsh dragged on (and got interrupted from time to time) it got pushed back (on the other hand, the supplement hasn't been released yet so I'm in no hurry).

Well, I think that's more than enough for now! Of course, I have a couple of more projects that I want to do, but in the small chance I get the time to start them this year they will have to be a bonus surprise for you all ...
Posted by Jonas M at 20:37 5 comments: