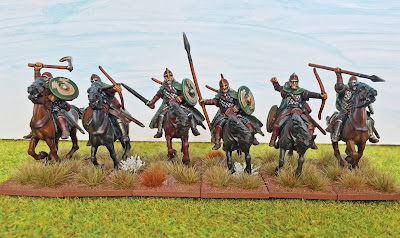 Well, now that fellow club member Sören has posted his truly wonderful version of Galadriel, the cat's out of the bag so to speak, and we can reveal our "secret project". Not that I know why it was ever a secret, but anyway ...

It's only fitting that Sören would kick things off, as he was the instigator after having watched one too many parts of The Hobbit! Me and Michael were quickly drafted into the project as it turned out we all had a fair amount of painted and unpainted Lord of the Rings miniatures in our respective lead piles.

As for my part, I have a lot of things on my plate right now and therefore choose the easy path and rebased some Rohan miniatures I painted 4 or 5 years ago, originally intended for Basic Impetus Fantasy (another abandoned project). However, after looking over the minis I found the paint jobs to be worse than I remembered. If I recall correctly they were actually speed painted using Army Painter dip. In an attempt to at least bring them up to a standard I wasn't too ashamed of to put down on the gaming table, I did some touch-ups and added a couple of highlights here and there in addition to the rebasing. The horses got some special attention, and one or two were even totally repainted. 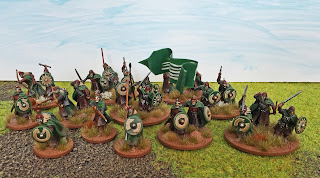 When it came to rules, we decided to go for the upcoming fantasy version of Lion Rampant as we're very familiar with the rules engine by now and it gives a fast and fun game. Going by what Dan posted on his blog about troop types and costs, I came up with the following:
1xHeavy Riders @ 4 pts
2xHeavy Foot @ 2x4 pts

That's a mere 12 points but should be enough to get me started. I have several more models in my lead pile, mainly heroes/characters, both foot and mounted. I'm thinking about painting up a mounted Éowyn, as she is my absolute favourite character in the books and films, but thematically perhaps Éomer would be a better fit. We shall see! In any way, the character would be fielded as an Elite Rider single model unit @ 6 points.

The models took a little longer to finish than expected, and are certainly not my best paint jobs (hence not too many pictures this time), but they're certainly good enough for a game or two!

And don't worry, that's enough fantasy for a while. Next up are some proper historical stuff.
Posted by Jonas M at 15:00 23 comments:

The state of the painting tray a while back ... 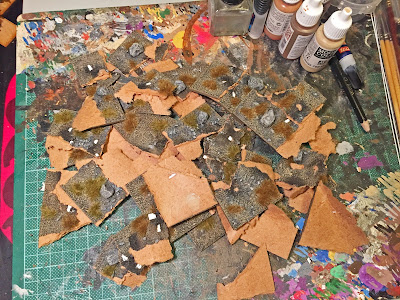 The fruits of the labour will be revealed during next week. 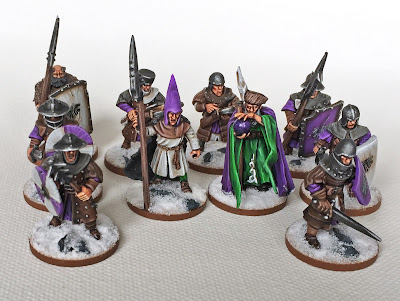 Regular readers may know that although I'm first and foremost a historical gamer I occasionally like to dabble in more "exotic" periods/genres. Last year I did a smallish fantasy project over the summer, and well – this year I did too! Inspired by my mate Dalauppror's superb kit bashed warband for Frostgrave, I had a rummage through my bit box and built a warband of my own.

An old GW plastic wizard was used as the central character. At this time, I didn't have the rules yet, but after flicking through Dalauppror's book I knew there was a wizard type called soothsayer and the crystal ball in the wizard kit would be a perfect match for this school of magic. After trying a couple of different heads, I used one with a fur hat as it looked good and would fit the winter theme of Frostgrave. 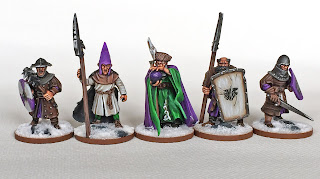 For the soldiers, I went with some old Bretonnian men-at-arms as the basis. I liked their heavily armoured look, which I think also fits nicely with the winter theme. The heads, arms and weapons are from a couple of different GW kits, including the original Bretonnians, Empire militia and State Troops. It was fun trying out different poses – tiny adjustments can really make a big difference for the look and character of the model. 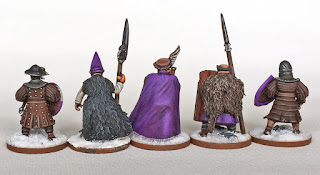 To make the soldiers look less uniform and more like a hardened band of mercenaries, I mixed shields from the original kit with different metal shields from Curtey's and Gripping Beast. The lion heads are overpainted transfers.

The apprentice gave me some trouble. It wasn't until I started playing around with a Gripping Beast model it all seemed to click. The model is from the Saga baggage set. He got a spare head from the GW wizard kit, a pole arm from the Bretonnian kit (it's a bit over-sized but hey, it's fantasy!) and a fur cloak for a bit of dramatic flair. I liked the look of the cloak so I went back an added one to one of the soldiers.

Then it was just a matter of painting them up, trying to find a paint scheme that tied them all together as a force. To make them stand out, I added a bright green colour to some parts of the wizard and the apprentice.

As I said, I didn't have the Frostgrave rules when I built the models. After receiving the rules and reading up on warband creation, I discovered my warband is too large, especially kitted out like this. Oh well, it's nice to have some models for when the warband grows – and of course I can use them for other games as well.

Thanks for reading – have a great weekend everyone!
Posted by Jonas M at 10:55 34 comments: