I'm steaming ahead with the Operation Winter Storm project and after finishing all the regular German infantry, it's now time for the support. First up are a couple of Pioneer teams, very useful for taking care of bunkers and other fortified positions.


The models are a mix of Peter Pig (specialists) and Battlefront (riflemen). Despite a difference in style and chunkiness, they mix pretty nicely in my opinion.

Here are another two squads of German Panzergrenadiers for the Operation Winter Storm project. Together with the ones posted last week they make up a reinforced platoon, and are all the regular German infantry needed for this project. Ah, the joys of working in 15 mm!


Miniatures are all from Battlefront. A mix of older and newer sculpts. I actually quite like them both but wish there were more poses with full winter gear.


Thank you very much for reading – have a great weekend everyone!
Posted by Jonas M at 13:13 20 comments:

After a (not so) brief fantasy diversion it's time to buckle down and get on with one of my planned projects for this year: WW2 Estern Front, more specifically Unternehmen Wintergewitter – Operation Winter Storm.

This was an attempt to rescue the encircled German 6th Army at Stalingrad during December 1942. The plan was for a relief force made up of the 4th Panzer Army, commanded by Field Marshal Erich von Manstein and consisting of the 6th, 17th and 23rd Panzer Divisions, to penetrate the Soviet lines from the south and secure a bridgehead over the river Myshkova. Meanwhile the mobile forces of 6th army would smash its way out of the Stalingrad pocket and join up. This was somewhat of gamble by Manstein, as Hitler had more or less forbidden the 6th Army from ever giving up the city.

The main effort of the drive from the south was to be with 6th Panzer Division, who was in very good shape after a period of refitting in France, while the other two divisions were protect the flanks of the advance. However, 17th and 23rd had seen heavy fighting on the Eastern front and as a result they were both badly understrength leaving the flanks of 6th Panzer Division dangerously vulnerable.

Despite this, and despite the crumbling front line, the first stage of the operation was a success: the divisions were able to detrain successfully while under threat from Soviets pouring into the gap left in the front line, stabilise the situation, and launch the operation.

The Soviets were taken somewhat by surprise by the attacking German forces, and in true Blitzkrieg spirit, the Panzer Divisions were able to rapidly speed deep into enemy held territory before the Soviets counterattacked. These attacks, fierce as they were, were initially fought back by the advancing Germans and the 6th Panzer Division could eventually secure the bridgehead over the Myshkova river. However, they had now suffered heavy losses and continuous Soviet attacks forced them to halt further advance.

According to the original plan, the 6th Army was now to break out of their encirclement and join up with the relief force. Despite Manstein's successful operation, Hitler still refused to let the 6th Army conduct the breakout operation. Manstein tried to convince General Friedrich Paulus, the commander of the 6th Army, to still go ahead with the original plan. While Paulus at first agreed, he later changed his mind due to the weakened state of the 6th Army and Hitler's expressed orders against it.

Manstein then made a final attempt to link up with the forces at Stalingrad, but despite advancing to within some 48 km from the city, the 6th Army made no attempt to break out of the encirclement. Sensing the moment lost, on December 23rd, Operation Winterstorm was cancelled as Manstein ordered the 4th Panzer Army to regroup to deal with further Soviet offensives elsewhere. The German forces at Stalingrad incredibly managed to hold out for another month, under constant worsening conditions, but on January 31st they finally had to surrender. Some 91 000 men were taken prisoner, and of these only 5 000 ever made their way back to Germany.

As a basis for this project I will use the excellent scenario pack for Too Fat Lardies platoon level game Chain of Command. My original goal for 2015 was to be able to play the first 14 (of 22) scenarios. This meant painting up models for both sides (Germans and Soviets), and to make all the necessary terrain – certainly an ambitious plan! But now we're already well into October and I've had to adjust the plan, making this first step a more modest one: my goal is now to finish all the German stuff this year. The Soviets and the terrain will have to wait until 2016 I'm afraid.


What better way to start then, than with two squads of the iconic German Panzergrenadiers. These guys are all about the firepower: with the tactics built around their (in)famous MG 34/42:s, they can pour out some serious amounts of dice. They have their Obergefreiters with them (Junior Leaders in Chain of Command).

As for the basing, I've been thinking this over for a good while, and as you can see, in the end I went for mostly single bases with the LMG-teams two on one base. The reason for this is mostly aesthetic rather than practical, as I think single bases just look better and more "realistic" when it comes to modelling WW2-tactics. And of course, casualty removal is a breeze with singles. If it proves too fiddly in play I can always rebase them ...

The regular riflemen are on a 15 mm base, while the JLs are on 20 mm bases to make them easier to spot on the table. The LMG-teams are on 30 mm bases.


The bases show a late fall/early winter theme with patches of snow, as the area was not fully covered in snow during December 1942. I'm not entirely happy with the look, mainly the snow flock  is a bit too coarse for this scale, and I might go back and adjust this.

Models are from Battlefront and I've gone for a mix of greatcoats and winter camouflage uniforms, with further diversity added by painting some helmets white. During the first winter on the Eastern front, in 1941, the Germans lacked suitable equipment as they were convinced the invasion would be a quick job, and they would be home before Christmas. When faced with the harsh Russian winter, they scrambled together what they could find of warm clothes and even had to improvise winter camouflage with scavenged bedsheets and captured Soviet winter uniforms (see the photo above). The relief force in 1942 would probably be better equipped for the winter conditions, but I think the Germans always look best with a somewhat rag-tag appearance.

Finally a shot of the two groups together with the platoon commander (Unterfeldwebel, Senior Leader). He's mounted on a 25 mm base to make him stand out from the JLs.


Next up are two more squads of Panzergrenadiers and then it's time for all the fun toys.

Thank you very much for reading – have a great weekend everyone!
Posted by Jonas M at 10:37 16 comments: 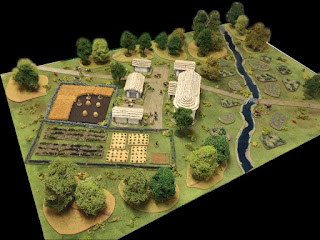 I couldn't resist sharing these pictures with you, showing the setup for tonight's game of Dux Britanniarum. The terrain was set up by my good mate Dalauppror, who has a real talent for making beautiful tables, and this time he really outdid himself. 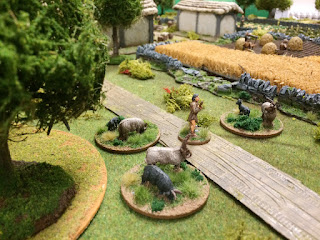 Buildings, markers, minis and trees by yours truly. The rest of the terrain is from the club. 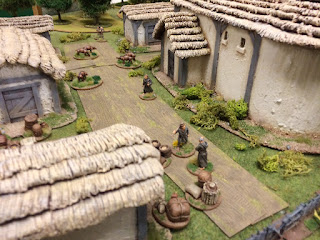 The game? Well, the Saxons were out to plunder the church but had a really rough nigh. But with two newcomers commanding them and the terrain placement perhaps being a bit too tough on them, this was only to be expected. Still, I think everyone had a good time – I certainly enjoyed visiting this old favourite of mine! 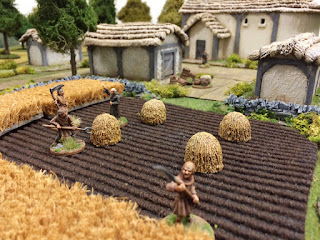 A full report with pictures of the action will be posted in due time.
Posted by Jonas M at 22:20 32 comments: