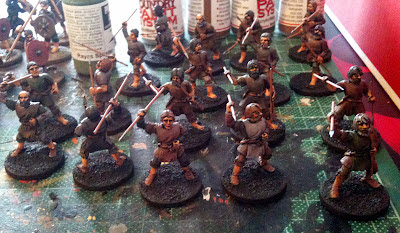 As predicted, I didn't get much work done this week because of various obligations. On top of that I have caught a cold which has further hampered my work. Despite all this I nearly managed to finish the Pagenes. What remains are highlighting their flesh, painting and attaching the shields and drybrushing the bases before varnishing.  Sorry about the more-than-usually bad picture.

I still haven't decided wether to do a simple highlight on the clothes as well, as I usually do. They now look rather grubby with just the wash (which is appropriate for a bunch of farmers I guess), and stand out against the other, more "clean looking" troops.

The plan is to have them finished by Monday night, including the bases of all the miniatures finished thus far (yes, also the Combrogi and Teulus) and then it's just the Lord and his Champion left before I tackle the Anglo-Saxon's reinforcements for SAGA. The Welsh should definitely be done by my self imposed deadline of Monday the 8th, but I'm not so sure about the Saxons ...

Join me in a week to see if I'm on my way to make that deadline or not. Have a nice weekend and thanks for reading!
Posted by Jonas M at 17:44 3 comments: 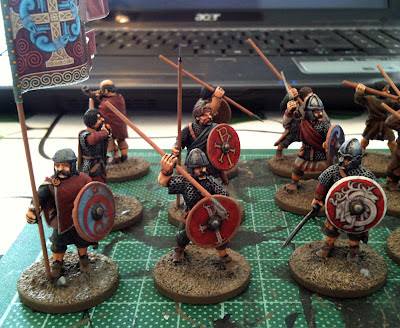 Well that's all for now. Welcome back next week for another update on the project. Thanks for reading!
Posted by Jonas M at 20:26 2 comments: 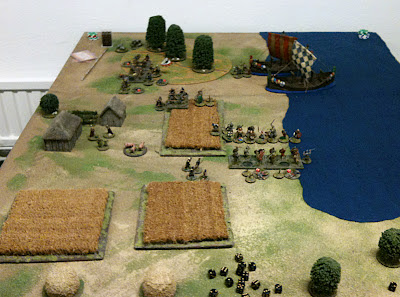 PS: I know I should have posted an update on the Welsh projects, but the weekend has been quite hectic. However, I've started with the post and it should be up in a day or two. Sorry to keep you waiting.
Posted by Jonas M at 22:41 2 comments:

Thank you all very much! I hope you like the blog and find it inspiring.

As I wrote in last week's update, I had hoped to finish the Combrogi and have started on the Teulu by now but things didn't exactly go as planned. Instead I got lured by Dalauppror into playing a mini-campaign in Dux Britanniarum with the British and Saxons substituted for Anglo-Saxons and Vikings respectively (not that I needed much convincing!). After a quick check of my Anglo-Saxons for SAGA I found out I was missing six levies, four archers and a champion for a full starter force.

So while Dalauppror very kindly offered to lend me the levies, four of the Welsh archers promptly got bumped up to the front of the painting que along with an Anglo-Saxon champion from a command pack I never got round to painting. I thought it would be nice to have the six movement trays needed as well, but wasn't sure I could finish them on time as it was only four days until the first game. If I managed them it would be bonus, but no big deal if I didn't.

Well, as usual I seem to work best when having a strict deadline (ie a game booked) and a couple of hours before the game, I put the matt varnish on the last of the models and on the movement trays. Phew!

After the frenzied painting over the weekend and on Monday, work continued on the Combrogi in a more leisurely pace this week. As you can see on the picture below they are now nearly finished. I had just applied the matt varnish before this picture was taken (hence the models are a bit shiny) and all that remains are adding some tufts, static grass and/or foliage. However, I might go back later and spiff up the shields as they look a bit plain at the moment. These are after all professional warriors and not some common levies!

I have set myself a deadline for October 1st for the Dux Brit part of the project. This leaves me with three weeks for finishing a minimum of six Teulu, 18 Pagenes and four characters (Lord, Champion and two Nobles). It's certainly doable but it's going to be tough due to that big chunk of Pagenes. As a result, I'm thinking about how to save painting time, what corners to cut, without reducing the quality (or at least without reducing it too much ...).

Anyway, thanks for reading! I will post a new update next week.
Posted by Jonas M at 14:54 3 comments: