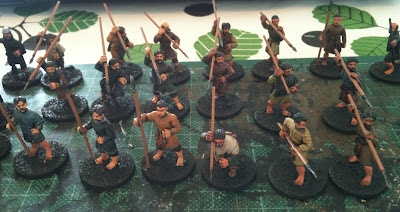 Another week, another short update on the Welsh project.

Since last week I have managed to blockpaint all of the 18 Combrogi, add a little detail such as trimmings, tartan patterns etc and slap on some washes and start to highlight them. Hopefully I can finish them off this week and then start painting the Teulu. I think I will split these into two groups of eight men each, as batchpainting large groups is rather boring to say the least. Besides, you only need six Teulus for Dux Brit (which is what I'm primarily painting for at the moment) so I can save the other half for later.

Join me for another update in a week!
Posted by Jonas M at 18:50