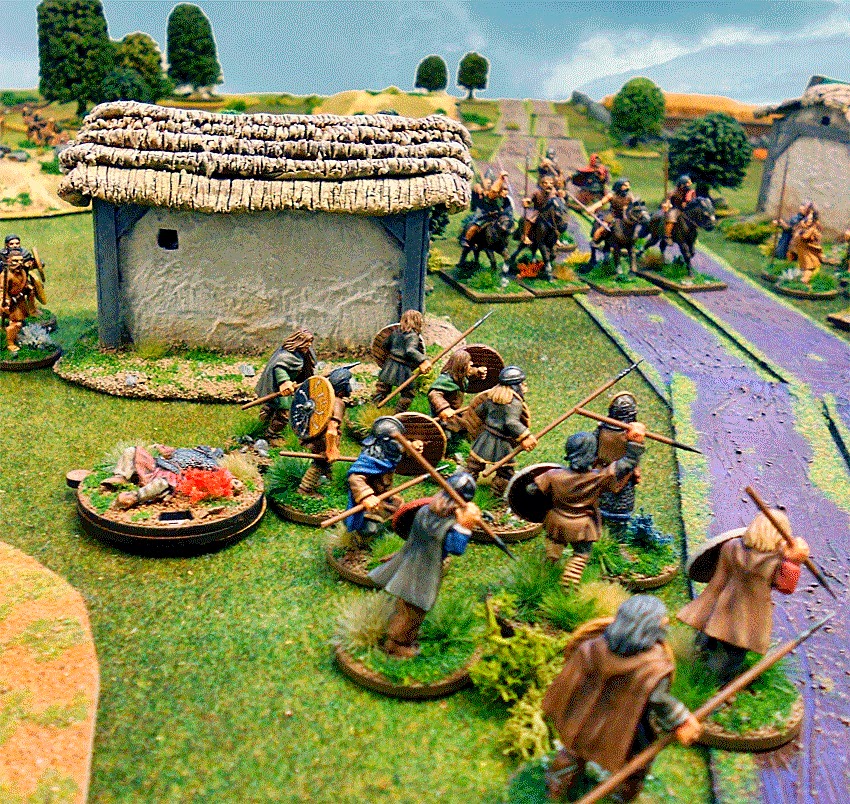 After lots of talking – and lots of painting and terrain building on my part – we finally kicked off our new Dux Britanniarum campaign last Monday.

I choose to base the campaign in Alt Clut, the northernmost kingdom of the Britons. Here they are trapped between the raiding Picts in the north, primarily from the Pictish kingdom of Fib, and the aggressively expanding Angles in the east, primarily raiding from the former British kingdom of Bernaccia.

As you can see, this is a three faction campaign and we will use the simple rules from the Raiders book to determine who has the initiative in each month, and gets first say as to what they want to do. This will be a pretty loose campaign, with whoever showing up commanding one of the forces – but in theory I suspect it will just be Michael/Dalauppror and me for the most part.

As I'm keen to try out all the factions (this being is our first campaign in Dux Britanniarum proper, rather than some sort of tweaking for another period) we'll be alternating between them, so that no one will play eg the Picts for the whole campaign.

To begin with, we plan to do one full campaign year and then we'll see about continuing. Alt Clut is a one-province kingdom, which means the total campaign shouldn't last too long. However, three forces still means quite a lot of games: 8 raiding months per year, with a possible 2 games per month makes it a maximum of 16 games for the year. Though in practice I think it'll be much fewer than that.

For the first game, rather than roll for initiative I simply decided that the Picts had the initiative and would raid an Angle village, as we were eager to test out the new Raiders' rules.

Dalauppror set up the table in his usual excellent way and away we went. We had another guy from the club, Jesper, joining us and he got to command the Picts while Dalauppror took the Angles and I acted as game master/referee. I got so caught up in the game, I forgot to take pictures, but luckily Dalauppror managed some snaps so a big thank you to him for letting me use these in this post!

The Picts had a whole four rounds headstart, but some not too great rolls for movement meant they had just reached the outskirts of the village before the Angles turned up and the fighting began.


A group of Picts managed to enter one building and quickly found all the loot they wanted (the raider's special rules for looting paid off nicely), while their comrades outside managed to hold their ground against the on-coming Angles.

The Picts proved to be tough fighters and drove some of the Angles off, much thanks to some well-placed flank charges (nice use of Carpe Diem cards). However, they were now pretty badly beaten up and hard pressed from the Angles who had managed to reform their forces before it was too late.


We had to call the game off early due to running out of time and looking at the situation, we decided the Picts dropped the loot and made a hasty retreat while the Angles stood their ground not really being in any shape to pursue them. Counting up the casualties, we were a little surprised to see the Picts coming out on top with just 6 men lost while the Angles had lost a total of 13 men. A slight victory for the raiders then.

The Picts would replace their casualties and be ready to raid in the next month (April). The Angles in turn, would need to 2 months before they were up to full strength (May). As a result we decided that the Angles would not raid this month and as the Britons could not do anything (they can only initiate actions when they have lost lands) this meant the first month/round of the campaign was over.

In the next round the Angles will again not raid, preferring to wait until all their losses are replaced, and the Picts will therefore be free to act however they want. Rather than raid the now weakened Angles, we thought it would be more fun to pit them against the Britons. So the next game will be Picts against Britons.

It was great to finally start up the campaign, and to return to Dux Britanniarum – it's still by far my favourite game and campaign system, even though it's not without its faults (mainly in the presentation/text).

It's been a while since we last played the game, and I'm not sure Jesper had actually played it before, so we were a bit rusty. We spent some time flicking through the rules (which, let's face it, could be better presented and explained) which was only expected. We also made a couple of mistakes, but nothing too game changing I think. Overall, a great start to the campaign and I'm really looking forward to continuing.

Thanks for reading – have a nice weekend everyone!
Posted by Jonas M at 16:31 21 comments: 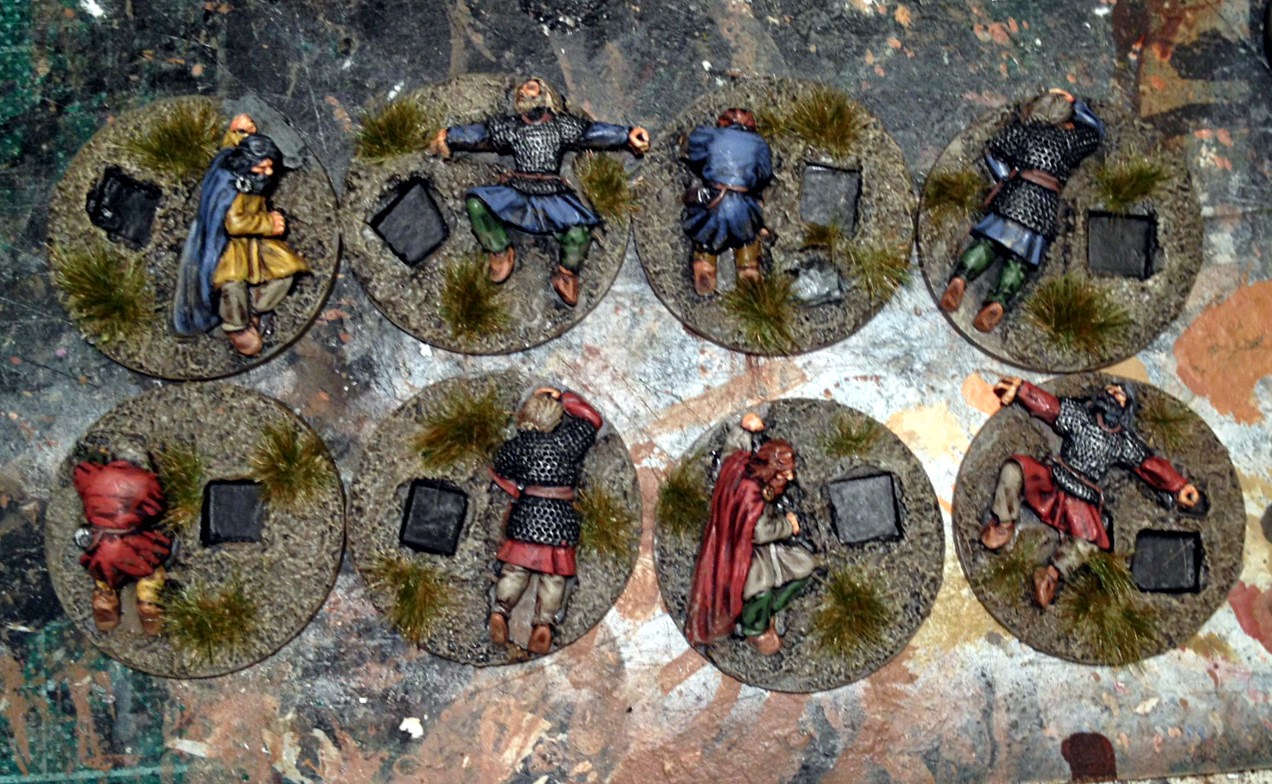 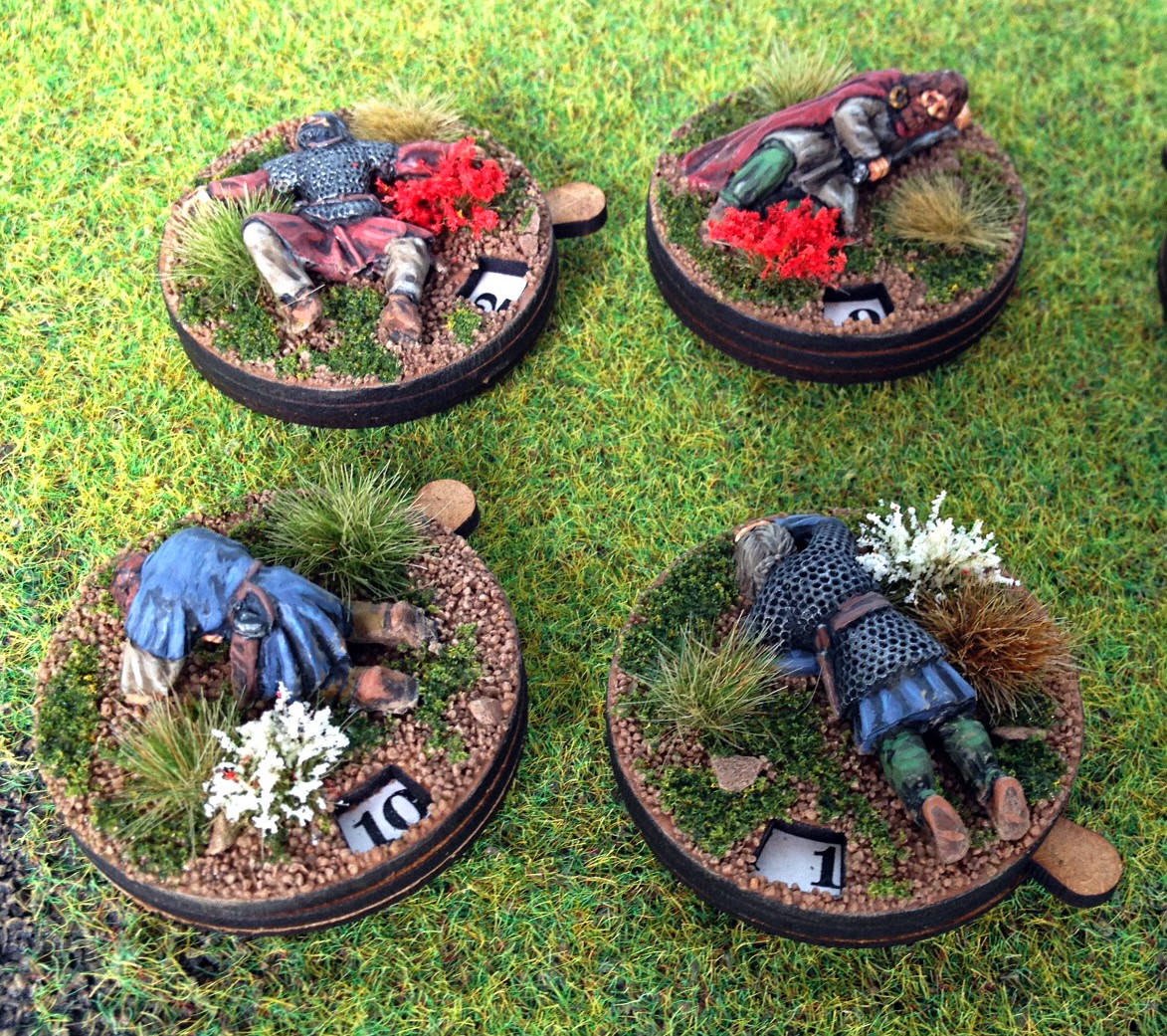 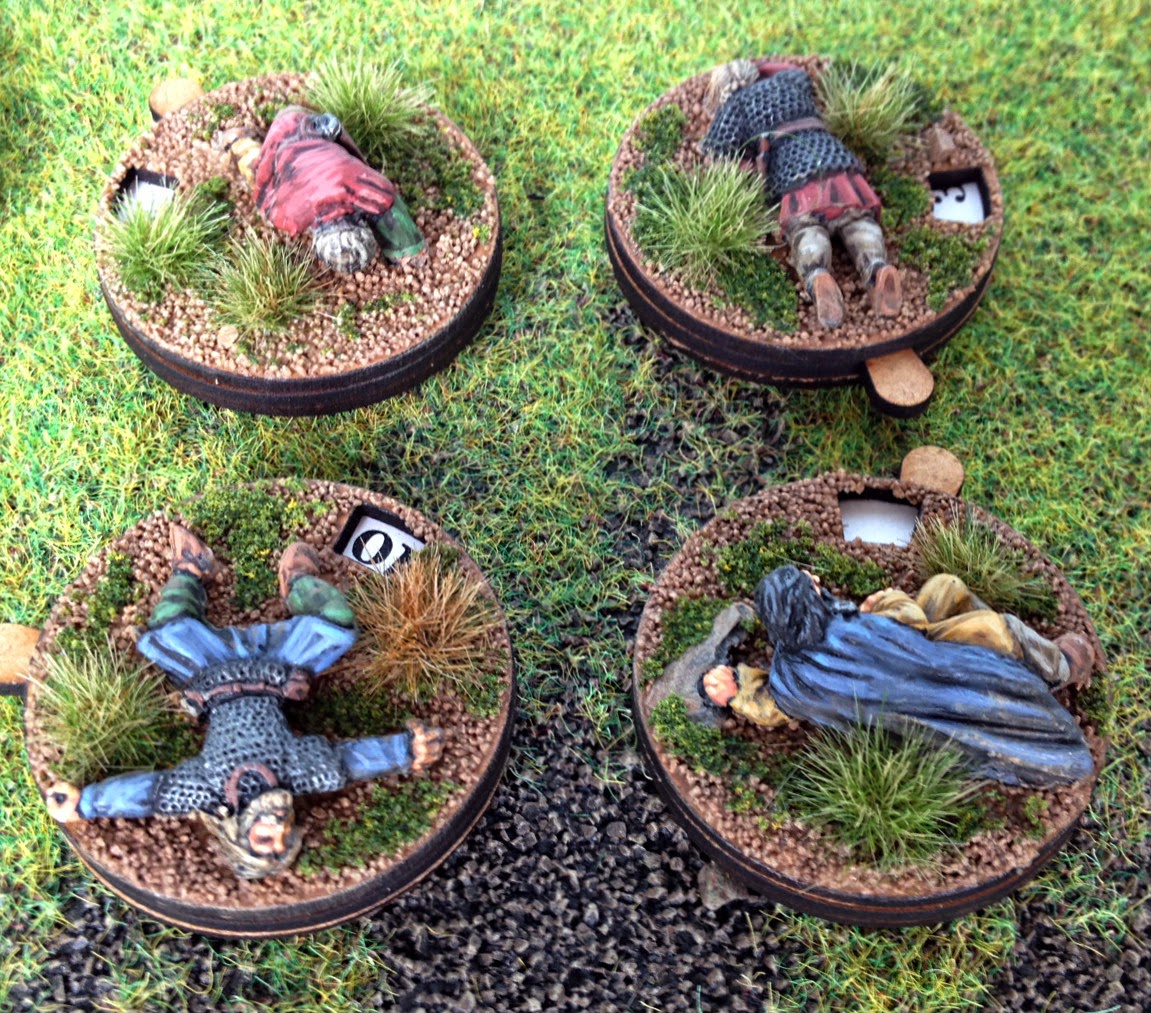 Thanks for looking, have a great week everyone!
Posted by Jonas M at 21:54 19 comments:

One thing I really like about my friend Dalauppror's lovely terrain set-ups, is his use of extras such as civilians. It really gives life to the scenes on the tabletop and helps transform the game into an exciting story.

I've always wanted to do something like this for my own games and now, with my dark age village finished, I've finally taken the time to actually do it. 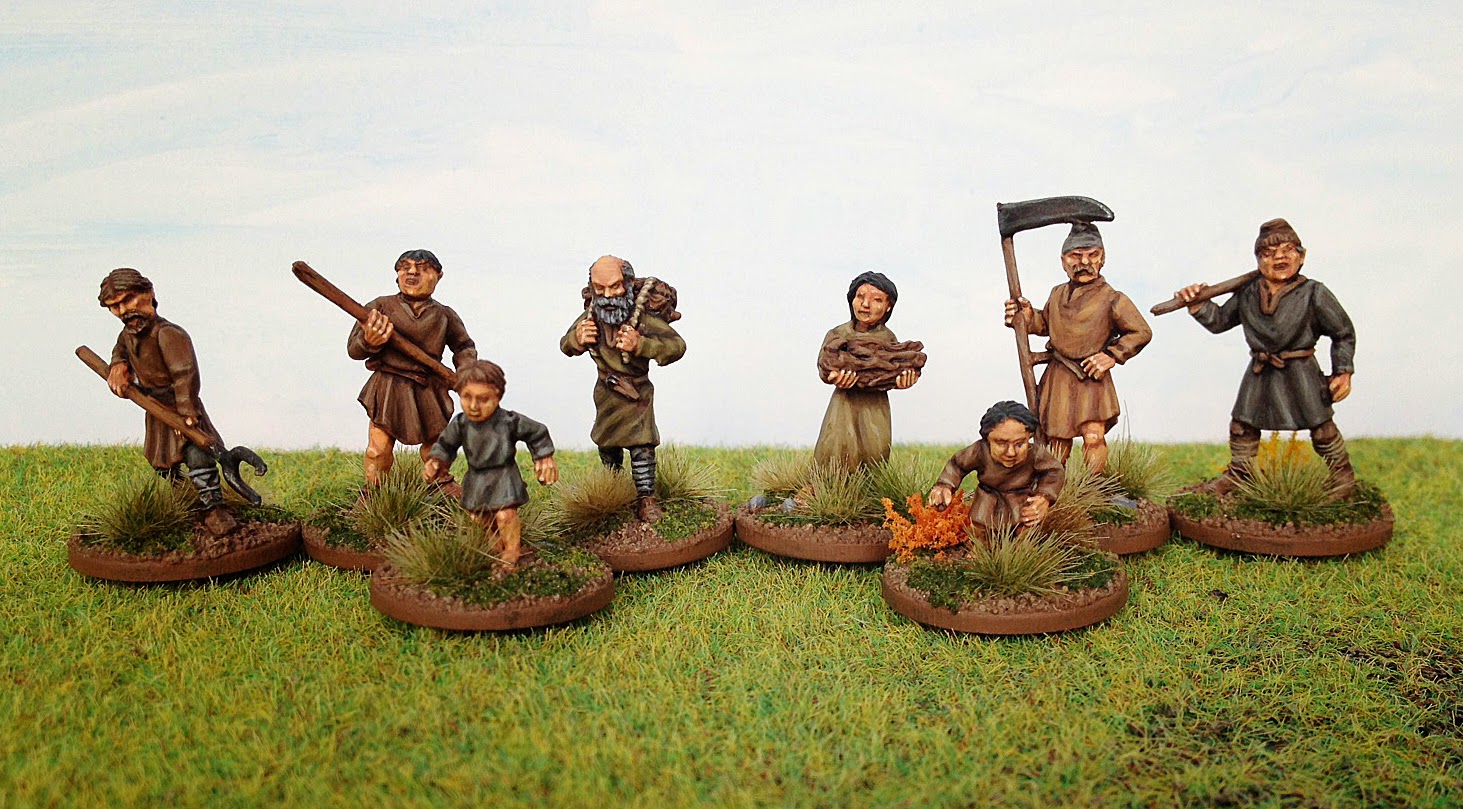 The miniatures are from Black Tree Design's Feudal Range and perhaps more suited to the proper medieval period, rather than the dark ages, but why be picky? 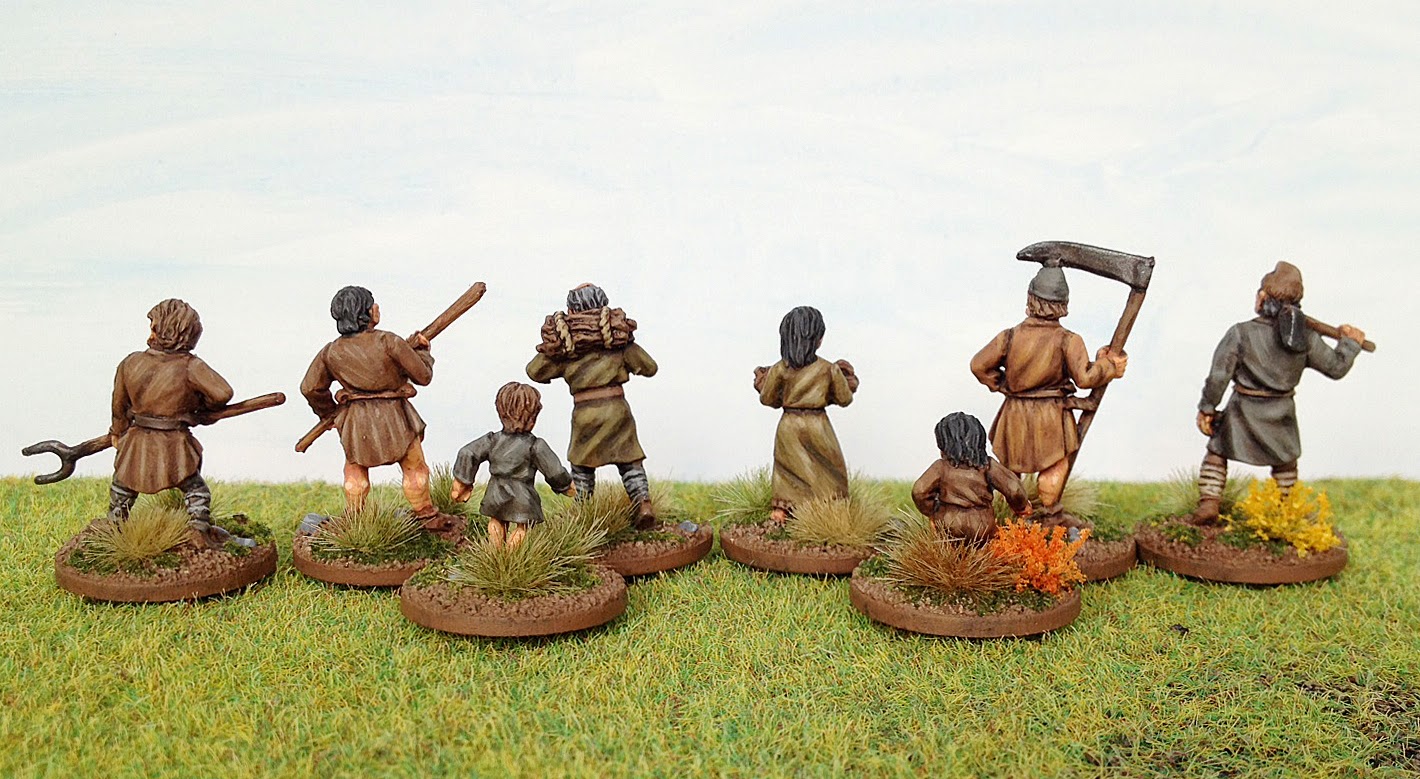 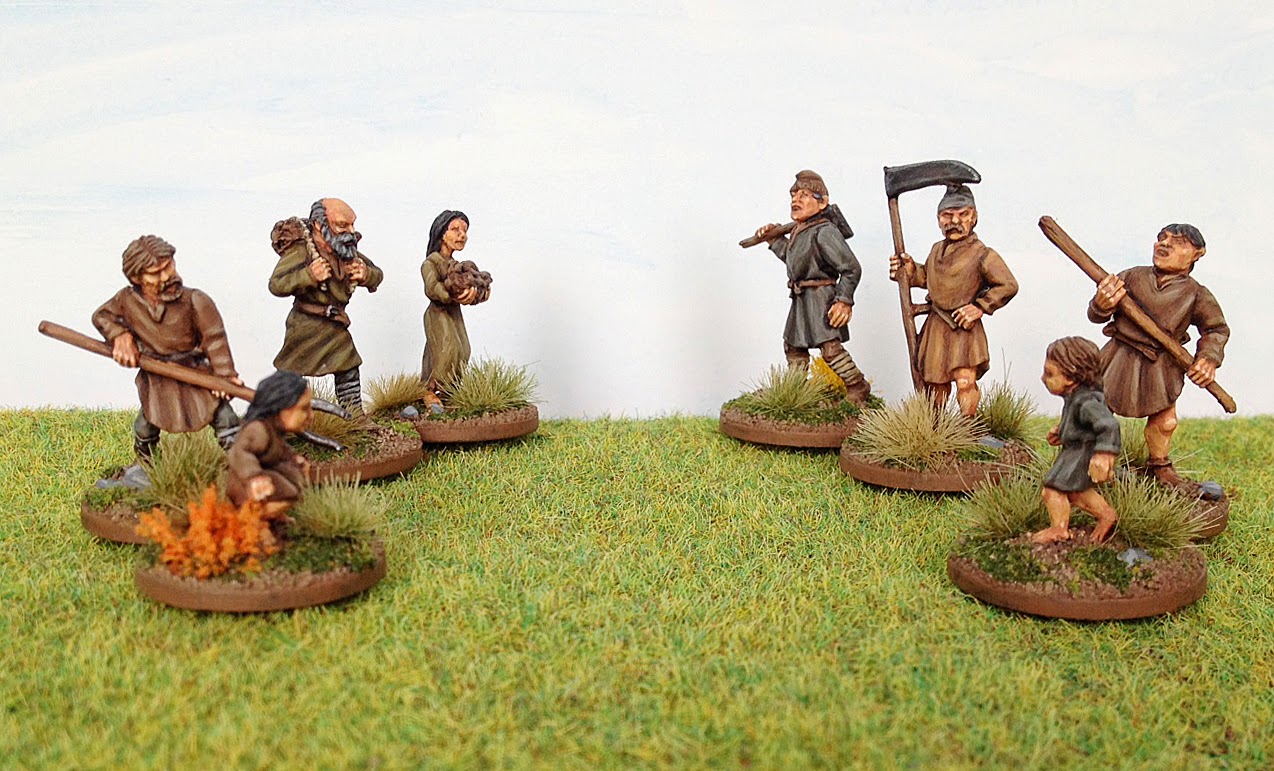 They will make their first appearance on the tabletop this coming Monday as villagers, in the first game of our new Dux Britanniarum campaign. More about this later.

Thanks for looking, have a great weekend everyone!
Posted by Jonas M at 09:18 18 comments: