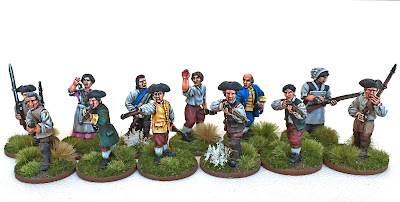 When I sold off my FIW French I agreed with the buyer to paint some Redoubt Miniatures civilians. I've had these in my lead pile for a while and it was nice to finally paint them up even if it was for a commission. 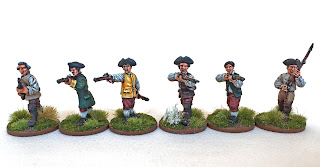 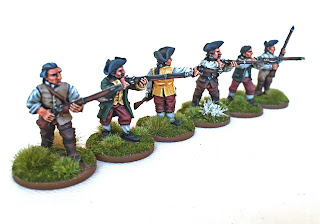 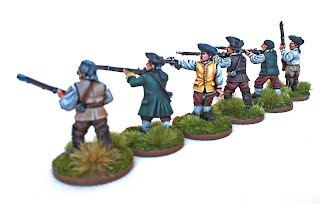 The sculpts are a bit hit and miss to be honest. Some of the heads are comically big and some of the poses look a bit weird. Also, the gun stock on one of the models was slightly miscast. Nevertheless, I think they have a certain charm and they do paint up nicely. 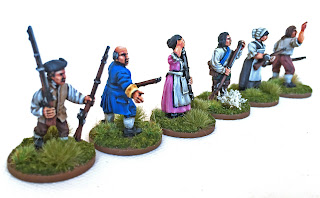 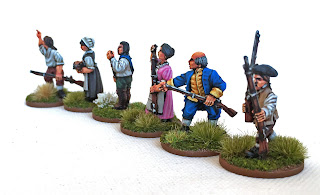 They'll soon be on their way to France (very fittingly), to join the rest of the force.

Thanks for reading and have a great weekend everyone!
Posted by Jonas M at 16:12 21 comments: 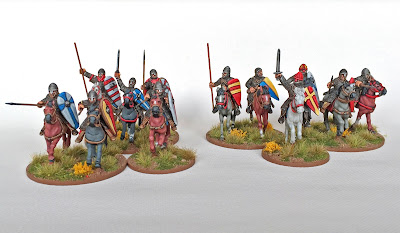 Just before New Year I previewed the first miniatures for Project F – the still "secret" project set in the early medievals, master-minded by the ever industrious Dalauppror. Now it's time for the first proper batch for this project and the last miniatures to be finished in 2015. 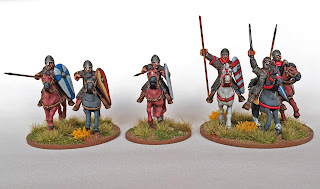 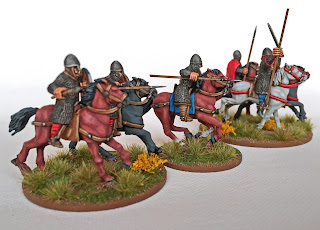 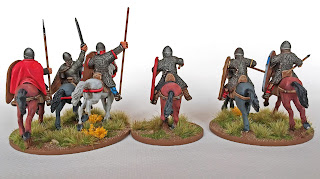 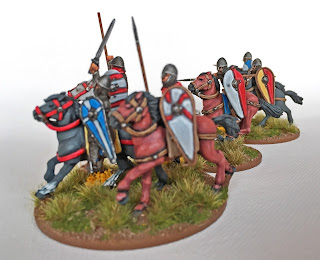 The miniatures are a mix of mainly Gripping Beast Normans, with some Black Tree Design 2nd Crusaders used as commanders. All very nice minis.

I'm using a bit of a "speed-painting" approach to this project, utilising a 3-tone technique in the Foundry style and cutting a lot of (small) corners. I pretty happy with how this has turned out, and while the miniatures don't look too good up close they look fine from a distance. 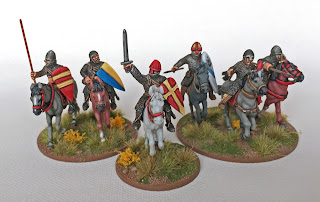 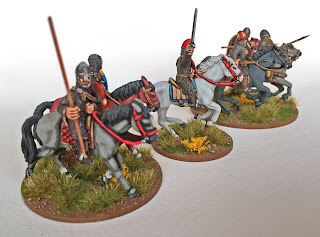 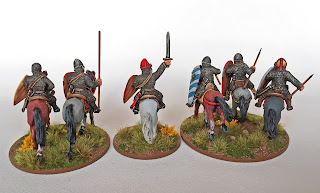 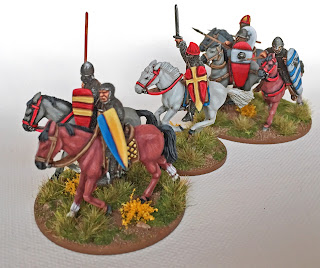 The shields are hand-painted, and some of them look a bit rubbish but I'm hoping these won't be too noticeable when all the units are done. Yes, there are more cavalry coming ...

You'll notice there are some flags missing, and this is because I still haven't decided on a design so I'm saving these for last.

After the mounted minis were finished, I did the painting tally for 2015 and realised I was just three miniatures short of an even hundred. So I picked three foot minis that were quickly painted up. 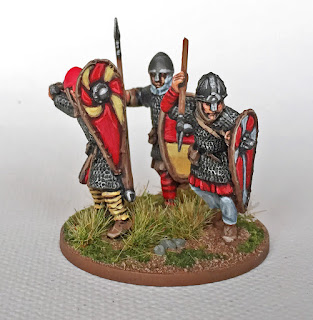 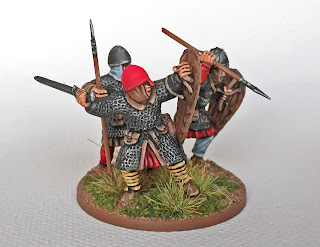 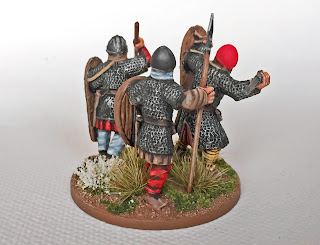 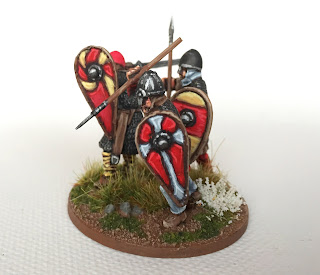 I'm quite pleased with how they all turned out, cavalry and foot, and I'm itching to continue with this project.

Thanks for reading and have a great weekend everyone!
Posted by Jonas M at 10:23 27 comments:

Out with the old, in with the new. Time to look forward and lay out my plans for this year.

FIW Civilians
As part of the deal when I sold off my FIW force, I agreed to take on a commission to paint 12 civilian models. This will be my first project for 2016 (in fact I've already started painting) and should be a rather quick affair.

Project F
The still "secret" project set in the early medievals, that was started back in December. There are a fair amount of models to paint and after the FIW models are done, this will be my sole focus for the first couple of months.

15-hundreds
My long neglected Italian Wars project. I just can't stand having this unfinished for another year so I've come up with a new plan: I will use this force for Dragon Rampant. They should fit perfectly as a not-Warhammer Empire army. By my calculations there are no more than 30 models left to do, including gendarmes/cavalry, artillery and commanders. With talk about Dragon Rampant gaming at the club this will hopefully give me the incentive to finish this project.

And maybe, just maybe, something else for this period. Yes, a new project! However, this depends on finding suitable miniatures, something that has proved to be a bit of a challenge so far. Maybe I just have to bite the bullet and do some conversion work – though I'm not too keen on doing this for the majority of an army. We shall see.

Fantasy
I've long wanted to do something with my old Citadel lead. With the release of Dragon Rampant, I think I've found the perfect excuse to do some fantasy gaming. Apart from the Italian Wars army, I have more than enough models for at least two opposing forces (good and evil) but realistically I can only finish one during this year.

I also have an idea for a multi-player, small scale fantasy skirmish/RPG hybrid that I really want to do. As always, time will be the limiting factor here.

Operation Winter Storm
I'm planning on finishing this project during 2016. What's left to do are the whole Soviet side, a pretty sizeable project on its own, and a fair amount of terrain including buildings and woods, together with smaller stuff like jump-off points, trenches, roadblocks etc.

I'd better stop here before taking on too much. These projects should keep me sufficiently occupied during this year. At least until something new and shiny comes along and makes a mess of these carefully laid out plans – we all know how these things go!
Posted by Jonas M at 10:23 11 comments: 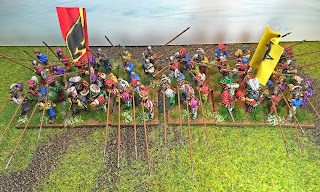 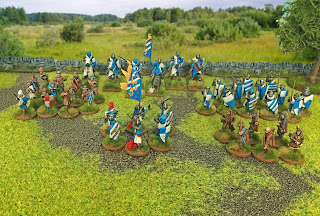 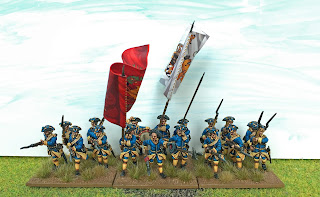 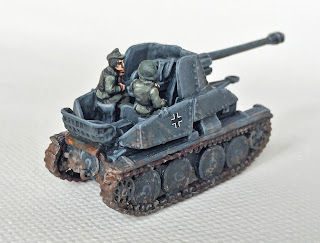 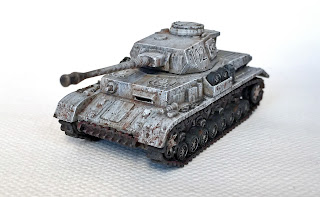 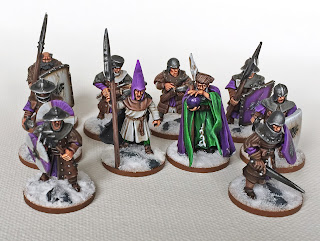 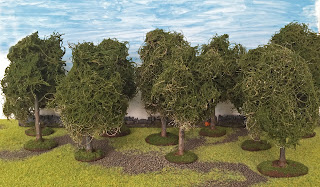 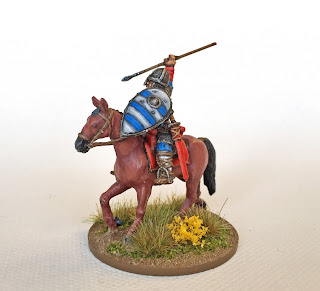 Finally, I want to thank each and everyone of you who read and comment on my posts – it really means a lot to me! I hope you all will have a great year.
Posted by Jonas M at 12:41 26 comments: