The first half of the first unit of city militia for the Novgorod force for the Baltic Crusades project is now finished.

Not much to add really, except I've decided to wait until the whole unit is finished before I do the bases. Hopefully they should be done during next week.

And here are some pictures, more to come when the unit is finished and I've added the snow to the bases: 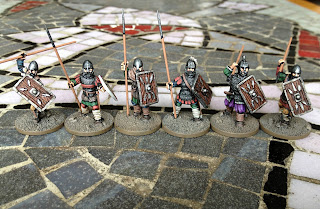 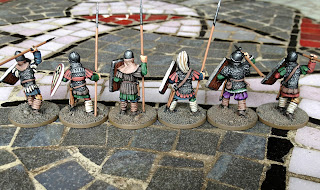 The miniatures are from Gripping Beast and the barely noticeable shield transfer is from Little Big Men Studios.

Finally a welcome to the new follower Johan Qvarfordt. Thanks for joining up, I hope you'll like the blog!
Posted by Jonas M at 13:16 8 comments:

The final units for my initial Novgorod force for the Baltic Crusades project will be two units of city militia, each of 12 men. They will be armed with a mix of spears/hand weapons and bows/crossbows to get me some shooting power – apparently the Russians were greatly feared for this, something I'm of course hoping to re-create!

I'm doing all the models armed with spears and hand weapons first and here is a WIP picture of the first batch of those: 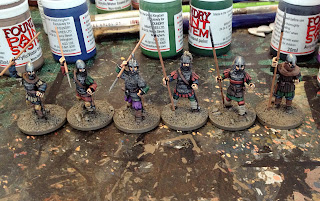 All the miniatures are from Gripping Beast's Early Russians range. Unfortunately, this part of the range is a bit hit-and-miss: some models are very nice while some not so. Also, they are quite slim, or perhaps I should say more "realistically" proportioned? Apparently the Beasties are "re-jigging" this range (I suspect it has something to do with one of the newly released factions for Saga) and it remains to been seen what comes of that.

Anyway, my plan is to use the archers and crossbowmen from the chunkier Medieval range. The match between these ranges is not that great, but I think it will look OK in the end – at least if I hide the shooters in the back ...

Finally, a warm welcome to the new follower Don Hans. I hope you'll like the blog and find something of interest here.
Posted by Jonas M at 16:02 10 comments: 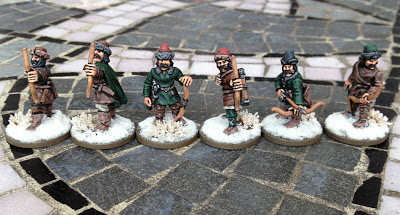 These bow armed skirmishers is the first infantry unit for my Novgorod force for the Baltic Crusades project. I imagine they are wood cutters or farmers, at home in the rough terrain, who have been drafted in service for the mighty Republic of Novgorod. As such they were painted in muted tones to contrast them against the very colourful druzhina. 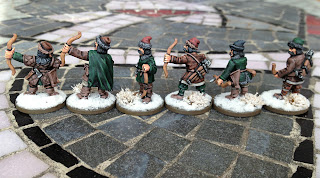 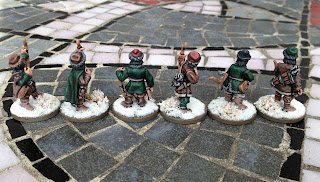 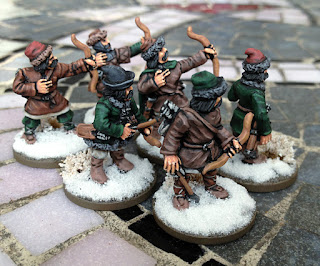 The miniatures are all from Gripping Beast's Medieval Russians range and slightly stocky. Despite, or perhaps because of, this they're very easy to paint up. Of course, it helps that you only need 6 of them for a full unit ...

Finally, a warm welcome to the new followers ghalgor and Millsy. I hope you'll enjoy the blog and find something interesting here.

Have a great weekend everyone!
Posted by Jonas M at 10:19 21 comments: 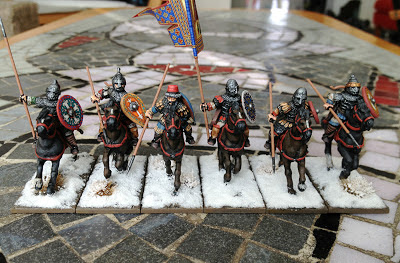 Here is the second unit of mounted druzhina for my Novgorod force for the Baltic Crusades project. This time it's a lesser prince – the guy with the nice red fur hat – and his retinue.

The miniatures are once again from Gripping Beast, and the flag and shield transfers are from LBMS. 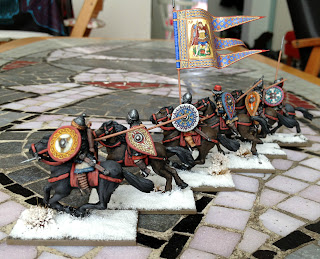 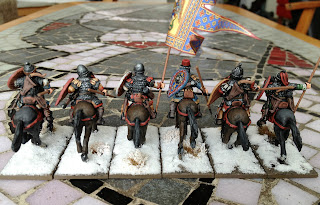 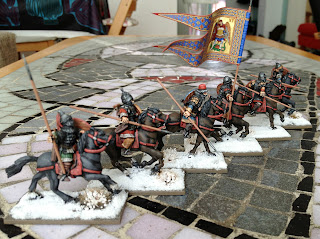 That's all the Novgorod cavalry for now. I might do some steppe riders later, but I've had enough of horses for a while so next I will focus on getting some infantry painted up.

Have a great weekend everyone!
Posted by Jonas M at 10:29 12 comments: