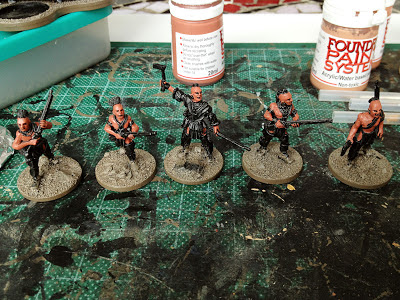 Just when I'd beaten the stomach flu last week, I got hit with another cold that left me knocked-out for a couple of days. This sure is turning out to be a winter of sickness.

Consequently I've not made much progress on the indians for my French force for FIW. As you can see, only the bases have been drybrushed and the skin parts have had their first layer painted on. Models are all from North Star.

Let's hope I'm back in the saddle for real this time, and will be able to press on with these models in the coming week. Then hopefully they will be finished (or mostly finished anyway) by next weekend. Fingers crossed and all that ...

Have a great weekend everyone!
Posted by Jonas M at 13:33 2 comments: 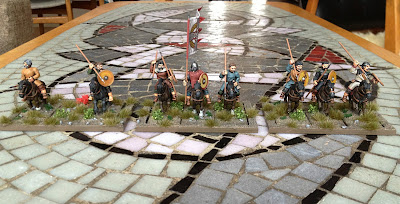 No update on the FIW project this week as I've been down with a nasty stomach flu for a couple of days, unable to do anything but crawl around on the bathroom floor begging for mercy. Yesterday I finally managed to crawl out of there and do some prep work on the indians though. Hopefully there'll be some pictures next week.

Instead here are some shots of the cavalry movement trays I made for the Welsh Dark Ages army. Nothing spectacular, and I've already shown the models a while back, but it's a nice feeling when that little part of the project left to do is finally done. (All miniatures by Gripping Beast and flag and shields by Little Big Men Studios.) 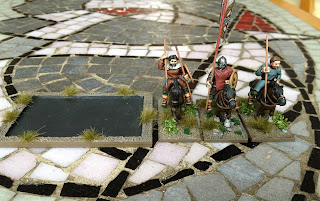 The base is 2 mm mdf, custom cut by Warbases to match their regular 2 by 3 movement trays I use for infantry. I then glued down some strips of pine wood from the local hobby shop and finished them off in my usual basing style. (In the end it probably would have been both cheaper and easier to just let Warbases do the whole job, but what would be the fun in that?) 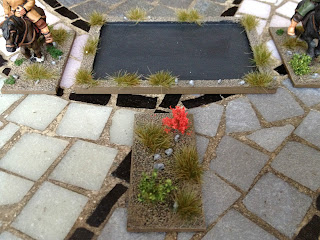 As there were an uneven number of models to fill the trays, I made an extra "filler" base. This way I can use the big base as light/skirmishing horse. 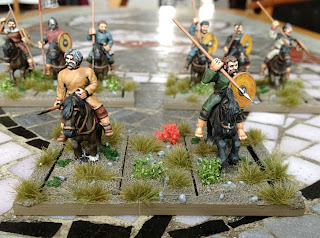 Photographing these made me realise I've forgotten to take some pictures of the whole army, like I promised back when it was finished. Oh well ...

Have a great weekend everyone!
Posted by Jonas M at 13:06 5 comments: 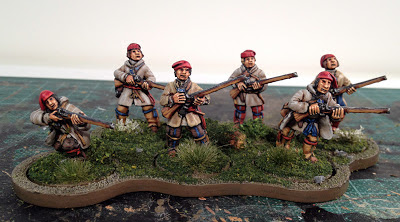 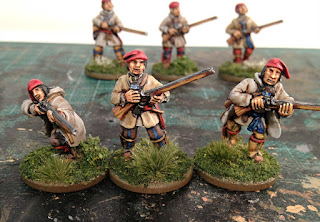 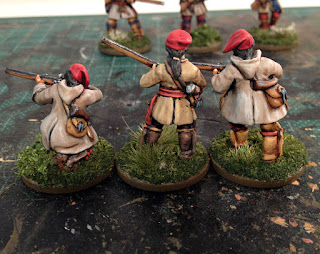 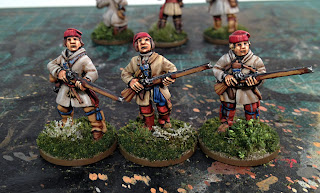 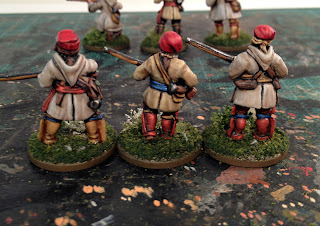 Now it's just the indians to do! I'm really looking forward to painting them, and to try my hand at some war paintings.
Posted by Jonas M at 19:26 5 comments: 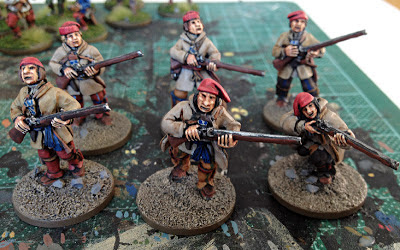 Finally I've made some real headway on the canadian militia/milicien for FIW. There's still quite a lot of work to be done, but I've started on the highlighting – the flesh areas and the red caps are done – so I'm getting there.

The miniatures are all from Galloping Major Wargames and I have to say they are unfortunately not as good as the ones from North Star: the poses and proportions are a bit odd to my eye. However, it's the faces that are the biggest problems, they lack in details and just look ... weird. As the miniatures are not exactly cheap this was quite disappointing to be honest. Still, with a little paint on them, I think they'll come out good enough. The plan is to have them all done by the next weekend, then it's on to the indians ("At last!" I hear you say).

Finally a warm welcome to my new followers: Grimsi Grogs, James Brewerton and MiniMike. I hope you'll like the blog.