Finally I've decided on my projects for 2012. I'm probably not alone in having a big list of ideas I'd like to get done some day, but these are the projects I'm going to concentrate on for the coming year. They are prioritized according to the aspects in the previous post.

SAGA
I'm going to finish my two 4 points warbands, vikings and anglo-danish. Originally I thought about doing some more terrain, and also custom made Fatigue markers, but these will have to wait until I've actually played the game. If it's as fun as I hope, then all these will eventually be done along with the additional troops to bring both warbands up to 6 points. But not before the next project is finished.

Old West
I took advantage of Foundry's clearance sale: All their books were 50% off and shipping was free (normally their shipping charges are ridiculous to say the least). Looking in the books section I found the Rules with No Name Mega Starter Set – rulebook, 13 models, brushes (not that I need them) and 12 "paint packs" (36 pots in total). I worked out that the paints alone would cost me more than the mega deal (yes, even if I bought them from the excellent Caliver Books). Well, that's a deal if I ever saw one.

So the next project, after the SAGA 4 points warbands are done, is two posses for Legends of the Old West: Lawmen and outlaws. This will be a fairly quick one, as I only need to paint six models each for the posses. Now, the terrain though, that's an entirely different matter ...

Basic Impetus
My Wars of the Roses projects trudges on, gaining and losing steam on an irregular basis. To get the damn thing finished at last, I've decided I will do a complete "type" (eg billmen, bowmen) in-between each project as well as in-between each "team" for the projects. That way I will have the entire project done during the year.

Three smallish projects should keep me well occupied for 2012 considering my usual speed! But in the unlikely event I need something more, here are the bonus projects:

I ran a three part mini campaign for some friends a couple of years back using the splendid 45 Adventure rules. Now, it wasn't the best or most imaginative scenarios but we had fun nevertheless. I've been itching to do something with the player characters developed for the scenarios. Perhaps a mystery in the jungle will pique Ms Roundtree's and Professor Wolcott's interests? Or an excavation in the desert, or something in the Antarctic, or ... Too many idead, too little time.

The Smoke
This is my secret steampunk skirmish project I've been thinking about for some years. Not decided on rules yet, but possibly 45 Adventure or some tweaked Legends of X. I recently learned of Westwind's Empire of the Dead, which looks as if it will give me some ideas.

Just a quick update to say I'm not gone, but I am rather busy what with job, a baby with a cold and yes, even some painting.

The happy news is that the Vikings are done. Yes, indeed. Pics forthcoming.

The anglo-danish are all prepped and ready for undercoating.

The projects list are still a WIP, though most of it I have decided.

And finally there's been some progress on the WotR project (although not without its hiccups). More on that later.

Hopefully I will post a lengthier update later this week, including som much needed pictures. Stay tuned and thanks for reading.
Posted by Jonas M at 10:04 No comments:

In the projects post i mentioned my plans for 2012 and before I talk about them I need to talk about my gaming situation. See, the people I game with are really cool and I like them a lot, but they are not wargamers. Therefore, if I want to try a new game I need to paint up at least two armies/warbands/teams and make all the neccessary terrain myself. All of which means that the start up time for any new periods/games tends to be rather long.

(I've thought about joining a club, to get more "into it" gaming friends, but so far I've not done it. Maybe this year?)

Anyway, for 2012 I've decided to make a list of projects I want to do, rather than just buying things at random. They will be rated according to a couple of aspects, to find out which projects are to be prioritized. These aspects are, in descending order of importance:
I'm putting gaming at the top, because in the past I've realized that nothing is more motivating than an actual plan to put it all on the table.

2 and 3 are related, as they are all about the time it will take to get the damn thing finished.

To tell you the truth, number 4 hasn't been too important in the past. But since I will be on paternity leave for most part of the year, the family budget (and as a result my hobby budget) will be a little tighter this year. Also, I'd rather spend my money on something that gets played than something that just get tucked in my bulging cupboards.

I'm still mulling the list of projects over, two projects are already decided, and hopefully I will post it in a day or two.
Posted by Jonas M at 13:13 No comments:

I'm pressing on with the viking ulfhednar/berserkers. Last night I managed to get all the skin done, and then started on the shields. After that it's just the metals and they are done. Yes! Hopefully I will have time to finish them tonight. As usual I wait until all models are done before doing the bases, to keep them consistent. 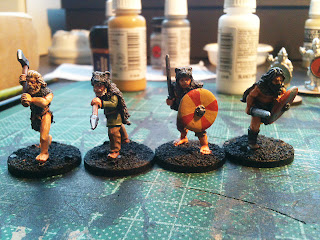 Sorry about the lousy picture. I used my mobile phone and the light's not very good today either.

If you look closely, you can see two of the final five models for the 4 points warband in the background. I had time to glue them to their bases and attach their shields. The plan is to start painting them this weekend if I can find the time.
Posted by Jonas M at 13:46 No comments: