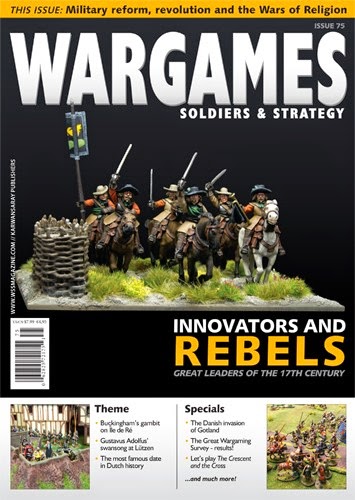 On Friday I received the new issue of Wargames, Soldiers & Strategy. An issue which is of special interest to me, not only because this time the theme is the Thirty Years Wars – an era I have long wanted to take a closer look at, but the timing has never been right (too much other stuff going on) – but also because it features an article by my good mate Dalauppror on the Danish invasion of the island Gotland in 1361. The fact that it even made the cover is fantastic!

This really is an excellent feature, with a comprehensive historical background, lots of nice pictures of lovely painted Danes and four scenarios for Lion Rampant that could be easily adapted to your rules of choice. It's well worth checking out by anyone with the slightest interest in Scandinavian medieval history.

I have contributed by some proof-reading and help in play testing the scenarios, as well as lending parts of my Dark Ages collection to be used as Gutes. If I had known the miniatures would end up on the front cover of WSS 2,5 years later I would have spent some more time on them ...

Anyway, this is not my show but all Dalauppror's – nice work mate and congratulations!
Posted by Jonas M at 10:35