In the last post for my Pictish raiders, I showed one of my custom made sabot command bases and said I would get back to those in a later post. Well, here is that post!

First, some background may be in order: I prefer to keep my models single based, as it's much more flexible – with single based minis you can easily switch to multi based units using movement trays like the ones from Warbases, but obviously not the other way around. But I do like these mini-dioramas you can do with multi based units. Especially command bases benefit from this I think, becoming nice centerpieces for your forces.

I've had this idea of doing sabot command stands for a while – I suspect I've seen it on someone else's blog, but can't remember where. I knew I wanted a couple of variants, for fun at least, and started to play around with different layouts.

In the end I decided on four variants, and made blueprints in Adobe Illustrator, saved them as a pdf file and sent it off to Warbases, asking for a quote. They responded quickly and had some suggestions to make the production better, which was very helpful. I ordered 5 of each variant, not that I needed that many right away but I thought they would come in handy for future (unplanned) projects. Delivery were quick as usual when ordering from Warbases, even though this was a special order and not something from their regular ranges.

As I base all my infantry on 25 mm round bases, the round holes were made to fit these. They are made much like the regular movement trays from Warbases, ie 2 mm mdf for both the layers.

As you can see, I drafted some miniatures from my Welsh army to act as models ...

The first base has a diameter of 40 mm. The idea is to use it with rules were the commander should have a strict base-size, for example games such as Saga. I could also see it being used for marking out nobles in Dux Britanniarum. 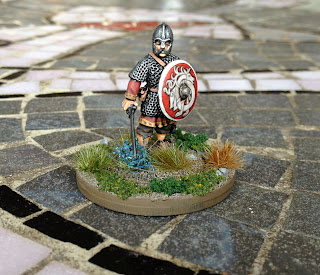 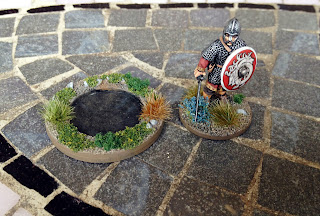 The second one you've already seen in the Pict post. The diameter is 70 mm, and it has place for two round bases. This is probably the largest size I would use for Dux Britanniarum, and then only in battles as I think it would look a bit silly for a simple raid. 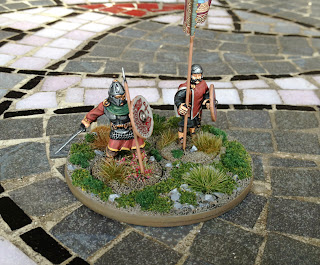 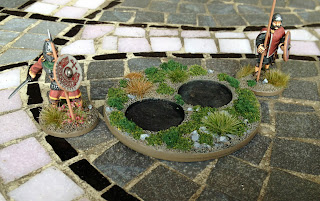 This one has a diameter of 80 mm and has place for a 25 mm round base and a 25x50 mm rectangle base, which I now use for all my cavalry. 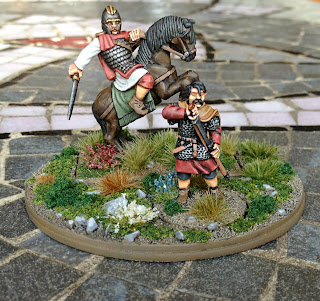 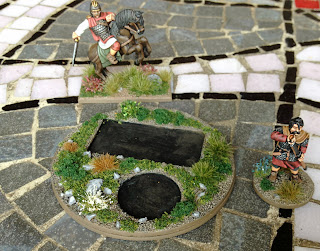 The final one has place for two round bases and one 25x50 mm rectangle base. The diameter is 100 mm. This base would suit the supreme commander of a large army – maybe even a king! 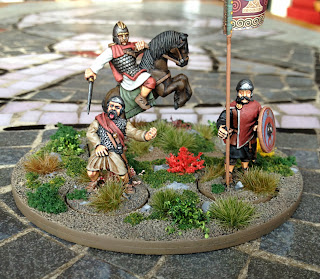 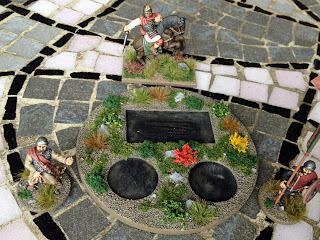 In hindsight I think I could have tweaked the positions a bit more, but overall I'm pretty happy with these. I don't think they will see use every week, but they're certainly a nice addition to the look of an army.

As a sidenote, after having once again struggled with the photos I have reached the conclusion that I need a lightbox. I rely on natural light when taking pictures, which is somewhat stupid as natural light is, by nature, very fickle and during this time of the year in Sweden, in short supply – and it will soon be even shorter. So, yeah, I will have to bite the bullet and build myself a lightbox. I'll do a post about this later, when I've got something to show you.

Finally, a warm welcome to the new followers Tomsche and Paul of the Man Cave. I hope you'll like the blog and find much inspiration here.

Thanks for reading, have a great week everyone!
Posted by Jonas M at 18:58

Email ThisBlogThis!Share to TwitterShare to FacebookShare to Pinterest
Labels: Basing