By now I think most of you know that despite occasional detours into other periods, my real passion lies in the so called "dark ages" and especially the British Isles during the 5-7th centuries. So unsurprisingly, for my next trick ... ahem, I mean project I will paint up a force of everyone's favourite Germanic raiders for Dux Britanniarum: yes, finally it's Saxon time!

This is the standard starting-force straight out of the rulebook and consists of:

The miniatures will be a mix of Musketeer and West Wind, as well as a couple from Gripping Beast.

I have decided to forego the smaller bucklers and instead use regular-sized shields as I just think it looks much better. Also, I've read somewhere that the historical evidence for bucklers is somewhat ambiguous. But mainly, as I said, I just think the large shields look better.

Anyway, here is the first unit to be finished – the skirmishers. 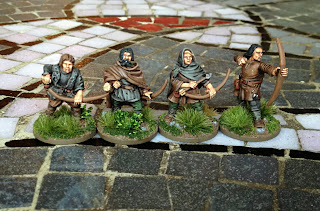 I've gone for a very muted palette on these, as I like to do for my skirmishers. It makes their job of hiding in the bushes to surprise the enemy easier. 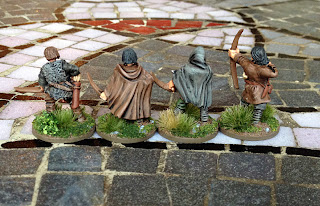 The miniatures are from West Wind, and very nice they are too. 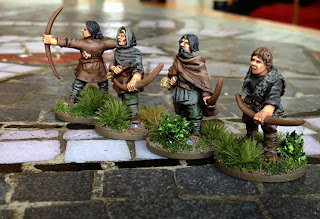 Have a nice week everyone, and thanks for reading!
Posted by Jonas M at 15:26