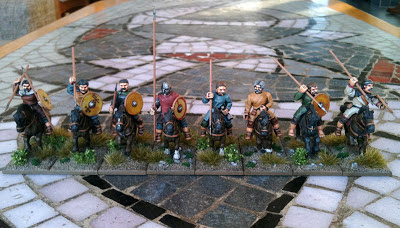 The penultimate unit in the Dark Ages Welsh project to be finished is the mounted Combrogi. Not much to say except that painting cavalry took more time than I expected (since you're really painting two miniatures at once). Also, as I wanted to make sure the riders didn't fall off their horses, I decided to pin them in place. But oh, how I hate pinning! I just can't seem to drill the holes straight and so the riders tilt in all directions making them look like quite drunk. Which is only appropriate for a bunch of Dark Ages warriors I guess ...

Anyway, here are some pictures of the finished cavalry: 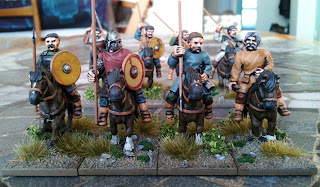 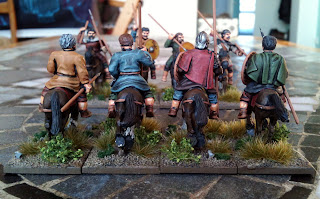 I went with very dark horse colours to set the riders off and experimented a bit with different markings to not make the mounts too uniform. Overall I'm quite pleased with how they turned out. 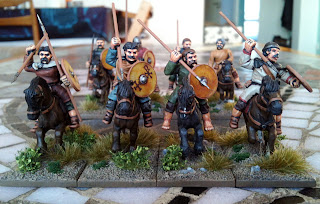 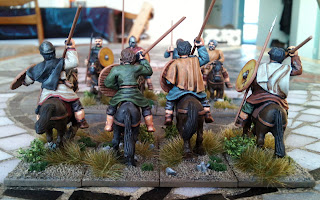 As usual, the miniatures are all Gripping Beast and the shield transfers are from Little Big Men Studios.

As you can see the standard bearer is missing his flag. I thought I had some suitable transfers in my stash but obviously not. A mistake that's now been rectified by a new order from LBMS. As I probably won't get these transfers before Christmas, I will have to wait until January to finish off those last details on the project. I'm also in the process of making some custom movement trays to use in Dux Bellorum. These should be finished in the beginning of January as well.

It's pretty close now! Just eight more miniatures and this whole thing is done. (Well, except for the banners and the movement trays that is.)

Thanks for reading! Have a great weekend everyone.
Posted by Jonas M at 12:17