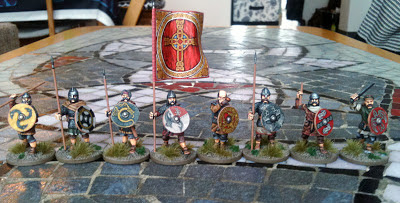 Well, here it is – the final batch of models to be finished for the Dark Ages Welsh project. These are eight Teulus/elites, the Welsh lord's or king's personal companions. To be honest, when painting the first unit I was lazy, leaving out some details to save time. However, this time I was willing to put in a little extra effort and have at least a couple of these new Teulus with tartan patterns. I think they turned out pretty good and so it was definitely worth the extra time it took to finish them. (Hm, maybe I will go back and add some patterns on the finished characters at least?)

On Tuesday, I fortunately received the order from Little Big Men Studios I put in last week, which meant I didn't have to wait until January to finish off the last details like flags. This in turn means this project is now completed – woho!

I really struggled with photographing these models, as I'm depending on natural light and there aren't much of that here in Sweden at the moment (it being the winter solstice and all). But eventually I managed to take some OK close-ups: 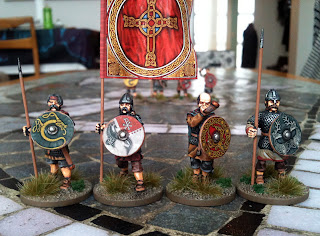 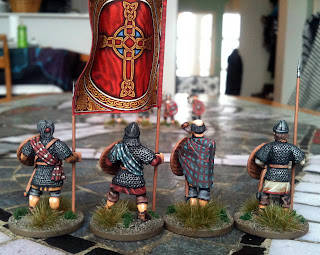 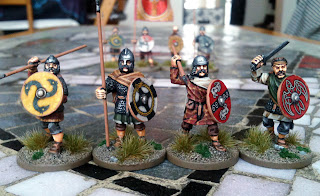 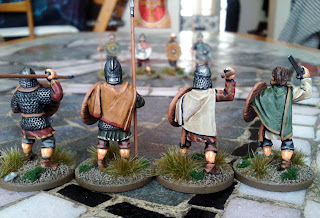 The miniatures are all from Gripping Beast, and the shield transfers as well as the flag are from Little Big Men Studios.

I'm very pleased to finally have such a big (for me anyway) project finished, and within my deadline of the end of the year too. Now I need to arrange to take some pictures of the whole assembled force, but this will have to wait until January when I'm back from my Christmas holiday.

Of course, I have already started on my next project but won't tell you what it is for a while yet, not until I have some miniatures to show. For now, the only clue I'll give you is that it's something like 1300 years between the Arthurian era and the era for this new project ...

Last of all I'd like to say a warm welcome to Phil and wish you all a great weekend!
Posted by Jonas M at 13:18