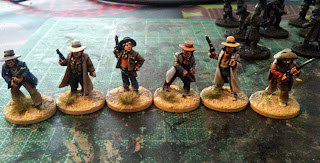 Now on to the second posse – the outlaws! I started them last week but time was short as I was away for the weekend. There's a bit more work left on this posse, and I won't get much painting done over this coming weekend either. However, hopefully they will be done before then.
Posted by Jonas M at 10:36