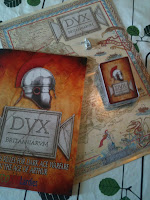 Earlier this week I got the package from Too Fat Lardies containing the pre order deal for the hard copy of Dux Britanniarum. In addition to the rulebook itself, the preorder deal contained cards (with a nice plastic card holder), a cool A3 sized map of Britain of the time and a limited edition Arthur model. Great stuff all 'round!

The actual rules are simple enough, a little bit more involved than say SAGA: as they concern themselves with formations (massed and shieldwall), manoveuring, evading and flanks are more important. Also, you start by generating backgrounds for all your Nobles (characters/leaders) with the chance to get some personality traits that will be useful on the battlefield. If you've played anything by the Lardies you will probably know the general philosophy and thinking behind their rules, and feel quite at home.

I think the most interesting part of the book is the much talked about campaign system. It's a slick system that lets you tell your own narrative of raiding Saxons and the defending (Romano) British. The different kingdoms presented vary in size, which makes it easy to tailor the length of the campaign (however, it still seems you will have to fight a fair number of scenarios to get the most out of the system).

This is all really well thought out, and have some really clever ideas. I can easily see the system being hacked for/ported to a number of different eras.