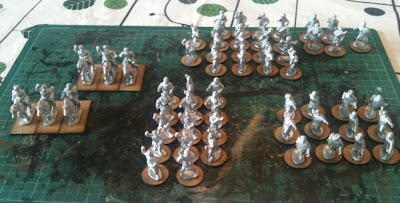 As I said in an earlier post I've devised a cunning plan to get a force to use in three Dark Ages games: SAGA, Dux Bellorum and Dux Britanniarum. The idea was to use a Welsh 4 points starter warband for SAGA as the core, and then add the required troops for the two Duxes. For Dux Bellorum I'm using the Welsh 32 points starter army from the author's blog post here.

Each regular unit in both Duxes will be 6 miniatures, individually based and mounted on 2x3 25 mm movement trays from Warbases. The cavalry will be 3 miniatures on similar sized movement trays, but since they will be based on rectangular 25x50 mm bases, I will make the trays myself.

Now, it turned out the plan wasn't that clever after all, since the overlap between the troops used in each game wasn't exactly optimal. Anyway, here are the different miniatures needed, with amounts for each game (SAGA/Dux Brit/Dux Bell):

In the picture above you can see the result of this weeks work: The miniatures have been cleaned and glued to their bases. All miniatures are from Gripping Beast. The only thing missing are the pagenes with spears/javelins – I have ordered some Welsh West Wind spearmen for these, as they are all barefoot (as far as I can make out anyway) and somewhat "poor looking" – and perhaps some suitable Nobles/characters.

I'm hoping to have all the weapons attached (shields will as usual be glued on when the miniatures are painted), sand glued to the bases, and all the miniatures above undercoated by the end of the coming week. Well, we'll see about that in a week won't we?
Posted by Jonas M at 12:45