My next project will be a couple of small forces for the club's A Very Moderate Swedish Conflict campaign. The first of these is the revolutionary Marxists of Röda nävar  (Red fists). They are a bunch of hardcore communists from Gothenburg – a traditional "red" workers' city in Sweden. In our campaign Gothenburg is therefore of course a strongpoint for the Reds, having captured it after very hard fighting in the streets.

More about the background of Röda nävar when I've finished them. In the meantime, here are some WIP shots. 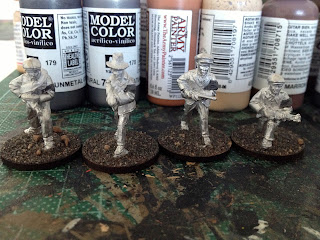 I've added some simple armbands from grey stuff and on the model to the left (armed with an LMG) I've added an extra ammo pouch, although it's on his back so you can't see it in the shot. 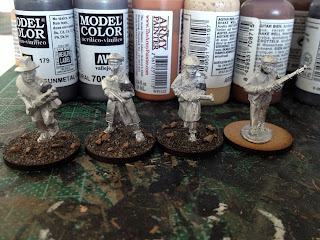 On the miniature to the right I did a head swap. I still have to do some filling in on the neck as you can see. 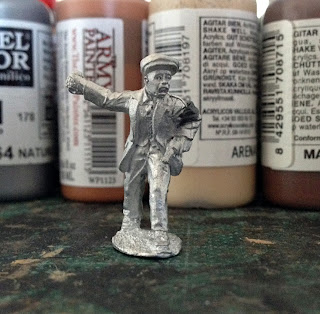 Also, I'll probably add stick-bombs/grenades to some of the models, as I had a couple of points left when working out the force list and grenades were pretty cheap.

All miniatures are from Musketeer Miniatures' Interwar range. Overall, they are very nice models, but I think the faces are a bit too similar and would have liked some variation there.

Hopefully I'll finish all the conversions soon, so I can start painting these models up. I will be going away on an "extra" holiday in two weeks time, and I plan to have them finished by then.

Thanks for looking! Have a great week everyone!
Posted by Jonas M at 18:40