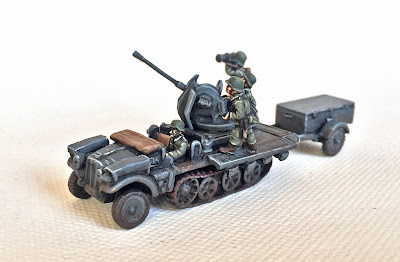 Well, this is it – the final German entry for the Operation Winter Storm project. It feels very nice indeed to have the first stage of the project finished.

For the finale you would have thought I'd painted something fitting, like a Tiger or perhaps a StuG, or any other iconic German WW2 vehicle. Instead I've gone the eclectic route and present to you the Sd.Kfz. 10/5. 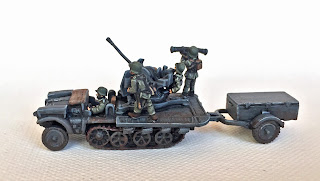 The Sd.Kfz 10 was a half-track vehicle that was primarily used as a tower for smaller guns such as the 2 cm FlaK 30, the 7.5 cm leIG, or the 3.7 cm PaK 36 anti-tank gun. As with most WW2 vehicles, there were numerous variants produced throughout the war. 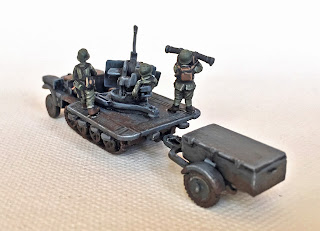 The Sd.Kfz. 10/5 carried the 2 cm FlaK 38 anti-aircraft gun on a special platform with fold-down side and rear panels. It had magazines for the gun fastened to the panels and usually towed an ammunition trailer (Sd.Ah. 51) with 640 more rounds, the gun's sights and its rangefinder. 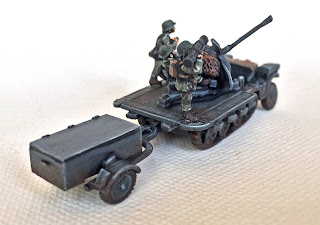 Though the FlaK 38 was designed as an anti-aircraft gun, it was also used against ground targets.

The model is from Battlefront and required a fair amount of cleaning up, especially on the resin main body. The other parts were in metal and while the cast was clean, the tracks once again suffer from the softness of details which seems to be prominent on most of Battlefronts vehicles. The gun barrel is also very soft, and bends easily, which of course is very annoying. Other than that, it's a nice little kit I think. 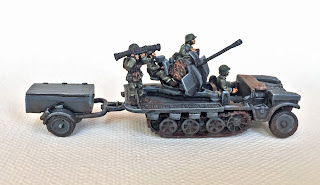 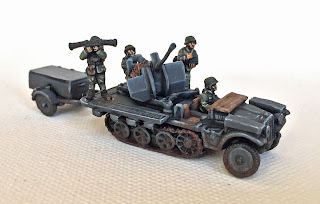 Rather than paint the vehicle in winter camo, I decided to do it in Panzer Grey with the crew in regular Feldgrau uniforms to make it a bit more versatile. 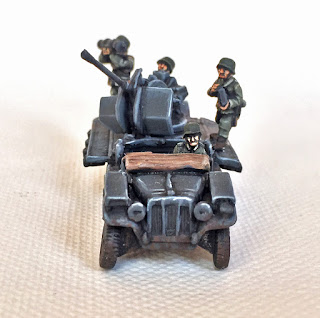 Now with this stage finished, I'm going to let the Operation Winter Storm project rest for a while. But I've already thrown myself into the next project for which I'm frantically painting at the moment. Stay tuned for more about this.

As always, thanks for reading!
Posted by Jonas M at 12:04