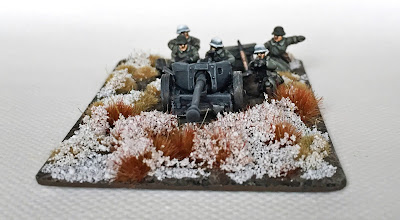 The Germans need something to counter those pesky Soviet tanks so it's time to bring on the heavier stuff in the form of a PaK 40 anti-tank gun. 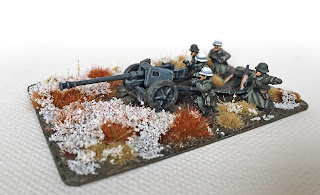 The PaK 40 (Panzerabwehrkanone 40) had been in development since 1939 but after Operation Barbarossa in 1941, the Soviets began to field more heavily armoured tanks like the T-34 and KV-1 and the Germans found they lacked the necessary firepower to combat these. Thus the development was given an increased priority and the first PaK 40:s were used on the Eastern Front in November 1941. It soon became the main ATG used by the German forces during the later parts of WW2. 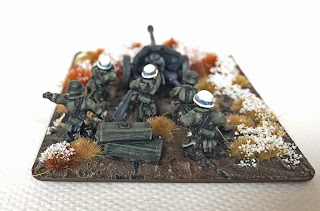 The crewmen miniatures are all from Peter Pig, while the gun itself (kindly donated by my good mate Dalauppror – cheers Micke!) is from Battlefront. 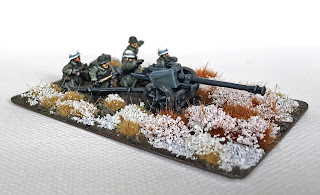 In keeping with the rest of this project, I avoided any fancy modelling on the base and just did some simple wheel marks in the mud (not really visible in these photos) and added a couple of ammunitions boxes.