This is the finished skirmish cavalry for my Pictish raiders force for Dux Britanniarum. The miniatures are a mix of Black Tree Design and Westwind.


In reality, I imagine the Picts would have ridden sturdy ponies, but since these horse models are a bit on the small side they look OK to me. 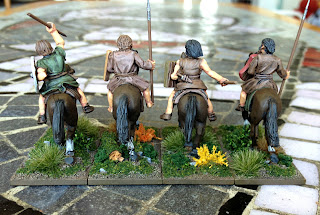 As usual, the shield transfers are from Little Big Men Studios. 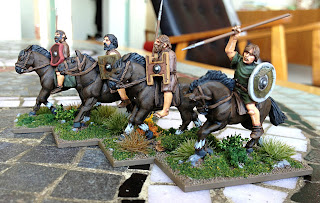 The BTD cavalry are as nice as the rest of the range, but unfortunately there's only three poses and they're all a bit static. A couple of more sculpts with more animation would have been nice.

With these skirmishers done it's just a couple of characters left before the whole force is finished. Nice!

Oh, and another thing: it seems this blog reached 10 000 total hits sometime during the last weekend, which of course is a very nice milestone. Back in April the total hits reached 5 000, which was some 15 months after I started. Well, it certainly seems the monthly hits are increasing as the next 5 000 was reached in just 4,5 months. Of course, counting hits is a fairly blunt instrument when gauging how your website is doing, but at least it gives you some indication ...

Anyway, I just want to say a big "Thank you!" to all visitors, especially if you're not a Russian spambot and also if you took the time to comment on one of the posts.

Have a great week everyone and thanks for reading!
Posted by Jonas M at 15:34