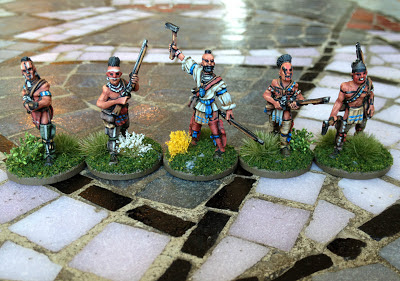 Well, here they are – the final (at least for now!) unit for my French FIW force for Muskets&Tomahawks.

I struggled a bit with the war paintings, trying a couple of different patterns and redoing some before settling on the ones you see here. At first I wasn't too pleased with them but now I think they turned out alright. The Hurons apparently used purple, as well as red and black, for their war paintings but I saved that colour for potential future reinforcements ...

Anyway, here is a shot of the group from behind. 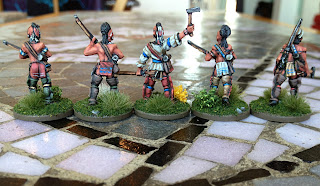 As always it's very satisfying to complete a project, even a small one such as this. I have some work left on the movement trays, although these are a bonus and not really part of this project. When those are finished, I'll take some snaps of the assembled force.

Our first game is booked for Monday the 18th – I'm looking forward to the French's first outing!
Posted by Jonas M at 16:12